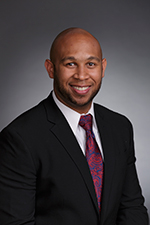 Dr. Jackie C. Thomas Jr. currently serves as the Chief Strategist at Lone Star College-Tomball.  In this capacity, he is responsible for providing senior-level leadership to the Office of Strategic Initiatives.  Prior to serving as Chief Strategist, he spent a year and a half as Assistant Dean and three years as a full-time faculty member at LSC-Tomball.

Meet the Director of Communications and Media

Jennifer Richardson has served LSC-Tomball in the College Relations department since 2004. In early 2017, she became the Director of Communications and Media, leading efforts both in terms of public relations as well as in the digital realm. Jennifer also engages with LSC-Tomball students in a more formal way, adjuncting with the English department.

Meet the Director of Professional Development

Kentrie T. LeDee currently serves as the Director of Professional Development at Lone Star College-Tomball, where she currently provides leadership to the Center for Organizational and Teaching Excellence department since 2016 and has worked in the field of education for more than 10 years.

Kentrie received her MBA from the University of Phoenix in 2009 and her Bachelor of Health Sciences from Armstrong Atlantic State University in 2002 after exiting the United States Air Force where she was formally trained in the healthcare field of Aerospace Medicine.

Meet the Director of Marketing and Events

Donielle Miller is from Houston, Texas. She received both her bachelor’s in Management and Marketing and master’s in Higher Education Administration from Sam Houston State University (SHSU) in Huntsville, Texas. After graduating with her bachelor’s degree in 2009, she accepted a position at SHSU and was later promoted in 2012. Donielle accepted a position at the University of Houston in July of 2014.

In 2017, Donielle began a new journey at Lone Star College-Tomball as the Director of Marketing and Events in the College Relations department. She currently oversees branding and marketing initiatives, alumni engagement, the student ambassadors as well as event services. She is proud to be a Timberwolf. One Wolf, One Pack!

Meet the Manager of Multimedia Services

Monte Darland oversees and manages the Multimedia Services department. He has been with Lone Star College for 10 years and with LSC-Tomball for over six years. His experience includes multimedia, photography and video production.

The Multimedia Services department serves the faculty, staff, students and administration of LSC-Tomball. The department team consists of part-time employees and work-study students provided by the Financial Aid department who are interested in digital content design and video production.

Meet the Director of Diversity and Inclusion

Jeremy Kirk comes to Lone Star College-Tomball from Auburn University where he received his M.Ed. in Higher Education and a B.S. in Middle Grades Education from Valdosta State University. His work with K-12 and higher education has launched him into his work on diversity, equity and inclusion.