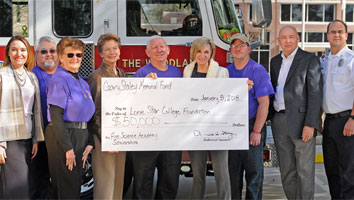 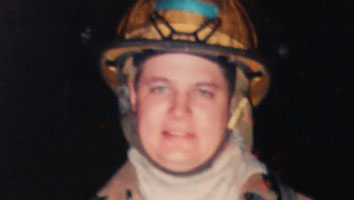 Family turns loss into hope with donation to the LSC Foundation

Nearly 15 years ago, Porter volunteer firefighter Gary Staley rushed into a burning building to make sure his fellow firefighters were not in harm's way. While searching, a tank loaded with nitrous oxide exploded, fatally injuring Staley and leaving his family in grief.

Looking to honor their son, Don and Ruby Staley created the Gary Staley Memorial Fund that provides scholarships for firefighters to improve their ability to protect the health and safety of the public.

"We thought it would be a fitting thing to establish a scholarship fund in his honor," said Don Staley, who is a member of the Gary Staley Memorial Fund Board and father of Gary Staley. "Thus far we have done about 200 scholarships and now we're doing this partnership with Lone Star College and we're excited about that."

In an effort to continue his legacy, the Staleys donated $50,000 to the Lone Star College Foundation through the Gary Staley Memorial Fund. The funds will create an endowment that provides scholarships for students entering the Fire Science program at LSC-Kingwood and LSC-Montgomery.

"We are incredibly honored by the generosity shown by Don and Ruby Staley and the board of the Memorial Fund," said Stephen C. Head, Ph.D., LSC chancellor. "Their courage in the face of hardship is inspiring to all."

Gary Staley joined the Porter Volunteer Fire Department in 2000 and received the Rookie of the Year Award in 2002. In all, he participated in over 300 fire calls while working full time as an accountant for Anadarko Petroleum Corp.

"This gift is incredibly moving and a wonderful way to remember Gary and the sacrifice he made," said Nicole Robinson Gauthier, LSC Foundation executive director.

Since its inception, the Gary Staley Memorial Fund has provided more than $90,000 in grants to nearly 200 students seeking a college education.