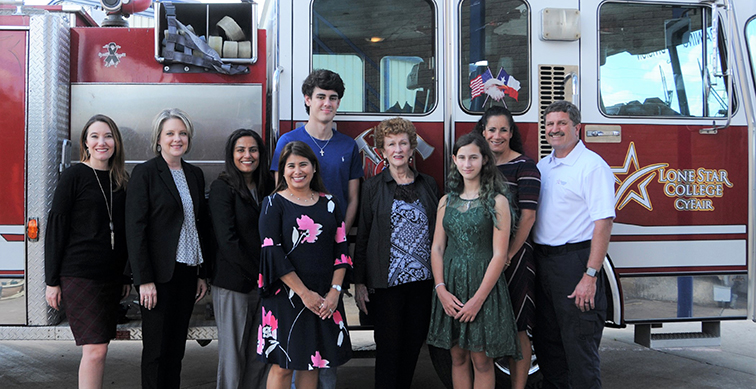 Tragically, Braswell's life was cut short in a bicycling accident. To honor his memory, the family has established The Mark Braswell Memorial Scholarship which will provide tuition for Lone Star College-CyFair students attending the Fire Science Academy.

"Mark had a family motto that he taught his children and he lived his life by. It was 'Braswells help people,'" said Michelle Braswell, wife of Mark Braswell. "Mark did that every day by living his dream as both a career and volunteer firefighter," she said. "Sandra (Mark's mother) and I wanted to create this scholarship to continue the family motto 'Braswells help people' and to share Mark's legacy for years to come."

The LSC Fire Science Technology program helps students meet the necessary requirements for an Associate of Arts degree which can lead to a rewarding career in firefighting. There are more than 26,000 firefighters employed in Texas alone.

"We are incredibly moved by the generosity of the Braswell family," said Dr. Seelpa Keshvala, LSC-CyFair president. "Their spirit and kindness exemplifies Mark's dedication to service and helping others."

"This endowment at the Lone Star College Foundation in Mark's name will go a long way to help many Lone Star College students achieve their dream of becoming a firefighter," said Nicole Robinson Gauthier, CFRE, LSC Foundation executive director. "LSC Foundation is proud to work with families like the Braswells, as well businesses and non-profit organizations to assist students in gaining more education and becoming an important part of our community."

Braswell also served as a seaman in the Naval Reserve and was called to active duty during the Gulf War in 1991.