The iPAD apps for 3D visualization of anatomical structures 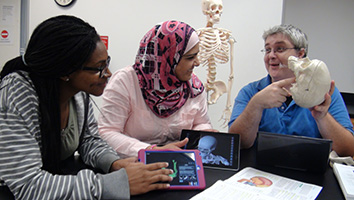 Did you know that the skeletal system of a full-grown adult has 206 bones? That is a lot of bones to remember. But thanks to Foundation and LSC funding of a mini-grant project, the iPAD apps for 3D visualization of anatomical structures, the skeletal system doesn't have to be scary! The funding of this project allowed students in Anatomy & Physiology I and II to test skeletal apps on the iPad, and future endeavors will explore additional apps covering the 11 body systems, such as Digestive & Urinary, Respiratory, Nutrition, Circulatory, and Cells.

Promoting greater student engagement in Anatomy & Physiology labs for students, as well as empowering instructors to bring high quality teaching into their classrooms, were two of the major goals of this project, according to Dr. Smruti Desai, biology professor at LSC-CyFair.

"Students can use their fingertips to zoom, rotate and get various views of the bones, isolate single bones, view bone markings and correlate them with the model in the lab," says Dr. Desai. She goes on to say that "the 3D graphics are simply stunning and gives them a better visualization of surface markings and joints, overcoming the limitations of plastic bone models that are traditionally used in the A&P labs."

In her mini-grant report, Dr. Desai concluded that the impact of this project on student learning makes it absolutely worthy of further development and expansion. In fact, data obtained showed strong evidence that the app improves student performance on lab exams.

"While the project focused on exploring one app, the skeletal system, our goal is to use the upcoming semesters to fully roll out and integrate the other apps in each of the A&P I and II courses," says Dr. Desai. "We anticipate that students will have a fully integrated understanding of body systems that was not possible earlier with the isolated plastic models available in the lab setting."