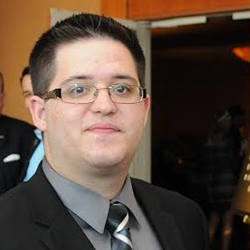 "My current goals are to carry my academic momentum from LSC to Texas A&M and serve the Bryan/College Station community through volunteerism," says Julian, who plans be active in construction-related student organizations and to volunteer for CARPOOL. CARPOOL facilitates a safe and reliable commuting environment in the Bryan/College Station area by providing free, non-judgmental rides home to intoxicated patrons and/or patrons rendered incapable of transportation due to other circumstances. Julian continues to say that "my father was taken from me and my family by a drunk driver, so this organization really hits home, and I am excited to serve the Bryan/College Station community."

Julian is also a candidate for the Terry Transfer Scholarship from the Terry Foundation, a huge opportunity which he says would not have occurred without Lone Star College leading him to success.

"My long-term, and ultimate goal, is to start my own construction related business so that I may provide jobs to my community which has given me so much," says Julian. "Without a doubt, I will be a Lone Star College Foundation donor in the future." Julian was honored as an essay finalist at the 2014 Chancellor's Breakfast. Read his winning essay >

Why I support the Foundation

"Providing access to higher education impacts not only students but also their families and communities by creating opportunities. I am very fortunate to be a part of such a great cause and see the results the Foundation has had on so many students."