“I always thought I was not intelligent enough to do it,” she said. “Fear will make you give up. It was always pulling me back.” 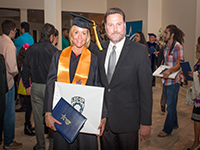 After years of encouragement by her husband, she started taking college classes. On Friday, May 8, the 38-year-old graduates from Lone Star College-University Park with an Associate of Arts, a near-perfect grade-point average, and a plan to keep working toward a bachelor degree in supply chain management.

LSC-University Park expects to graduate about 325 students this academic year, more than a third of whom will walk across the stage during commencement ceremonies at 7 p.m. at The Centrum at Cypress Creek Christian Community Center, 6823 Cypresswood Drive in Spring.

This year's graduating class reflects a 77 percent increase over the number of graduates in 2013-2014 and the number of students participating in the ceremony has increased 95 percent over last year.

LSC-University Park President Shah Ardalan said ceremony had to be moved off-campus this year to accommodate the growing number of graduates.

“Our faculty and staff have worked hard to keep up with the tremendous growth we are experiencing,” Ardalan said. “We know these graduates will go on to make us — and the community — very proud.”

McGee began working in a stationery shop in Buenos Aires as a teenager and eventually opened an importing business with her mother. Wanderlust took her to Spain for about two years, but she returned to Argentina because the poor economy there prompted her mother to sell the business.

The two packed four suitcases and immigrated together to Houston to find a better life. They opened a coffee shop in Midtown, but had to close it after nine months.

“We lost every penny we had, but it was meant to be,” McGee said. “We met everyone we know — including our husbands.”

Customers helped her work on her English and she would read things she didn’t understand just for the practice.

“I think I started dreaming in English six or seven months into being here,” McGee said. “I remember I thought, ‘Wow, I was dreaming about my grandmother and it was in English.’”

Over the years, she worked at her husband’s real estate company, a nail salon, a tax preparation company and the purchasing department at the Port of Houston Authority. Some personal challenges motivated her to look for new direction, so she enrolled at LSC-University Park thinking she might pursue kinesiology.

“Then I attempted to take a biology class for science majors and I was like, ‘This is not for me,’” she said. “It’s the only class I’ve ever dropped.”

McGee didn’t give up on college, however. She continued taking courses and, despite her fears, language did not become a barrier.

“I understood more than I thought I was going to and that gave me the confidence I was lacking for so many years,” she said. “English became a little technical in certain areas. I would have to Google a lot.”

Before this semester’s final grades were in, she had accumulated a 3.93 GPA — perfect but for one B in Accounting.

“I realized how organized I was. I amazed myself on that,” she said. “I don’t remember in the past two years having a full weekend – until this weekend – when I said I’m not going to touch school.”

She qualified for The Honors College, but only had the opportunity to take one course, Anatomy and Physiology, taught by Professor Jason LaPres, director of the program.

“She finally felt a connection that she had been missing. I think the community of being involved with Honors is really what she thrived on,” he said. “She is a prime example that Lone Star College-University Park and The Honors College can enrich the life of anyone.”

McGee will continue taking courses this summer through LSC-Online. In the fall, she will be back on the University Park campus to work toward a bachelor’s degree in supply chain management through the University of Houston, one of LSC-University Park’s partner institutions. 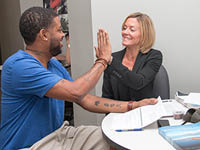 McGee wears a silver bracelet engraved with the words “Never Give Up,” a recent gift from a friend. She said attending college is a privilege that she enjoys so much that pulling into the parking lot improves her mood even on her worst days.

“The cure for any sadness that I go through is definitely going to school. It was meant to be,” she said. “I love to come to school — I really do.”

Most importantly, McGee said, LSC-University Park has helped her banish her feelings of inadequacy.

“Now I am fearless to be me,” she said. “I really feel super lucky. I never thought this was going to happen. I have come out of my shell.”