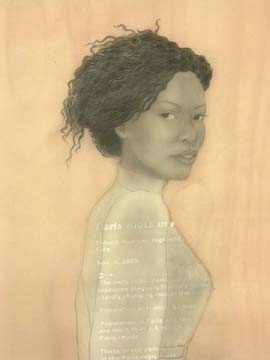 In a fascinating and timely exhibit at Lone Star College-Kingwood, artist Lisa Qualls creates an eloquent installation that addresses the ongoing plight of African immigrants who are seeking escape from desperate living conditions at home and who struggle to build new lives for themselves in Europe.

Qualls has traveled extensively to Europe over the past 18 years. "The inspiration for the series Paris is Burning came both from reading literature about the history of interactions between Europe/Africa, and my own experiences in Europe with African immigrants," says Qualls.

In the exhibit Paris is Burning the artist uses skirt forms, made with cotton and boning, imprinted with text from European newspapers.  Many of the texts are narratives about the journey to Spain or about families left behind to await word from their loved ones.

The skirt forms are used by Qualls as a way to represent the hundreds of years of interaction between the two continents. "I am interested in how cultures absorb and share garment forms, patterns, body, markings, and ritual objects. Over time some African tribes adopted the hoop skirt forms as part of their traditional and ritual dress," describes Qualls. 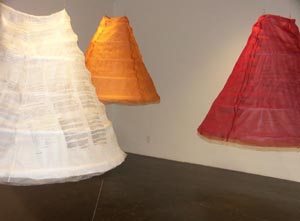 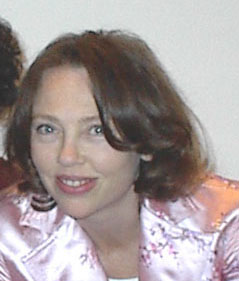 I am fascinated by the way man chooses to make his environment and self visually pleasing as well as using these symbols, patterns and forms to organize and identify both himself and others.  I use visual markers to create artwork about identity, culture, history and politics.  I layer text and imagery, pattern and imagery, and form and text.  I often choose transparent materials and combine them in 2-dimensional and 3-dimensional formats. The drawings, mixed-media pieces and sculptures are inspired by history, culture and text from various sources.

I use the same processes on paper and fabric working back and forth.  The idea of creating garments that use the text, images and dyes is very exciting to me.  The form and history of the garment style adds another layer to the meaning of the piece as well as turning it into a sculptural piece that hangs and uses light and shadow in a way that the flat wall pieces do not.  These fabric pieces work exceptionally well when suspended to enhance the transparency and layers of text and image.

Each weekday morning on the way to the office of my day-job at a community college, I have the pleasure of passing the small, glassed-in campus art gallery. Then, each evening I catch another glimpse of visual inspiration on the way out, which often sparks ideas to mull over on the commute home and later apply to my night-job as a writer. The January exhibit of works by Lisa Qualls has captured my imagination and begun the New Year and the new semester with a remarkable blend of the timely and the timeless.

Imagine hoop skirts covered with diaphanous silks in the colors of ivory, saffron, cocoa, and cayenne, all floating in the space between floor and ceiling, seemingly waltzing on light and air. This is the vision that stopped me in my tracks, then compelled me into the gallery for a closer look and to hear the artist's commentary on her creations. Since my work as a novelist focuses on the mid to late 19th century American South, I immediately thought of plantation mistresses in their restrictive crinolines. But these skirts suspended in the gallery are so much more than costumes from a bygone era.

The series Lisa Qualls has entitled "Paris is Burning" combines the artist's research into the complicated relationship between Europe and Africa with her own experiences of meeting African immigrants in Europe. Qualls states she is "interested in how cultures absorb and share garment forms, patterns, body markings, and ritual objects." Her artwork reveals aspects of cultural identity, issues of immigration, and influences of colonialism that have shaped history and continue to affect current events. Some of Qualls's drawings incorporate period European textile and wallpaper patterns with African ritual masks or body markings. One especially arresting pencil drawing on vellum presents the image of an African man dressed in a stylish 19th century European suit and displaying ritual scarification on his face. Another depicts a hauntingly lovely African woman dressed in white, the hem of her gown blending into the intricate pattern at her feet, the design pigmented with coffee and beeswax.

And then there are the skirts of silk organza over cotton and boning, echoing the past and the caging and concealing of women's bodies, but offering, as well, other compelling layers of meaning. The artist calls her grouping of skirts "Surveillance Maritime", explaining it "is about Africans leaving in boats from the Canary Islands and trying to reach the coast of France." Qualls has applied text in English, French, and Spanish to the dyed silk, describing the European reaction to illegal African immigration. European surveillance of the coastal waters leads to the apprehension and return of Africans trying to enter Europe illegally and sometimes leads to the rescue of people in danger of dying in the boats. In the context of the exhibit, the hoop skirts become vessels, ribbed boats covered over with a skin of fabric that tells a story of a modern quest for freedom. Yet, they are reminders, too, of long-ago ships that carried Africans into slavery.

With "Paris is Burning", through layers of line, color, texture, and text, Lisa Qualls captures layers of complexity found in the enmeshed histories of Africans and Europeans. From her work I gratefully draw new inspiration for my historical fiction, a deeper sense of the ways cultures exploit and engage each other, and a greater appreciation for the interplay between the visual and literary arts.

For more about artist Lisa Qualls: