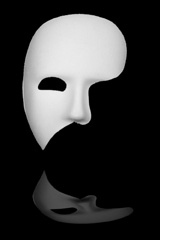 One of Andrew Lloyd Webber’s well known compositions “The Phantom of the Opera” will be performed on stage April 27 through May 6 at Lone Star College-CyFair.

“All the singers in this show work very hard to learn their parts, but they enjoy the process as they observe how important the teamwork will be for a major musical production. They are encouraged to broaden their musical awareness and to develop musical, technical and staging mastery through daily class and rehearsals,” said Qian. “I am so pleased that they are able to stretch themselves to such incredible dimensions. This show will provide wonderful experiences for all of us.”

Student talent will not be the only impressive part this LSC-CyFair performance. College student welders and employees with the Center for the Arts production team and in the Department of Advanced Technology teamed up last November to build one of the most famous props of this whimsical and haunting tale – the chandelier.

Built of steel and weighing 350 pounds, the chandelier is a partially collapsible 5-foot-tall by 8-foot-wide by 4-foot-deep light fixture powered with 6 circuits allowing different parts of the chandelier to flash independently of each other.

“The chandelier is a character in ‘The Phantom of the Opera’,” said Albrecht. “It has to come to life at the beginning of the piece, crash and rise again.”

Learn about the chandelier, the costumes, the performance and more at the talk back with cast and crew following the May 6 performance.

All performances will be held at 7:30 p.m. Fridays and Saturdays and at 3 p.m. Sunday in the Main Stage Theatre in the Center for the Arts building at 9191 Barker Cypress.

Tickets are $15 for general admission and $10 for seniors. Group discounts are available.  LSC students and employees also receive complimentary admission with a valid ID.