A team of Lone Star College-CyFair students are creating a prototype zip tie cutter tool designed for use during Extravehicular Activities (EVA) or “spacewalks” and that will be tested at NASA’s Johnson Space Center later this year. 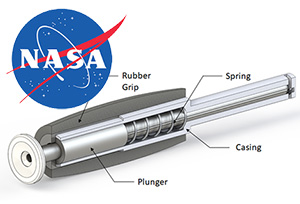 “The zip tie cutter tool must be compatible with bulky EVA gloves, only use manual power during one-hand operation, and must be ambidextrous. In their proposal, Team CERO designed a pen-shaped tool with which the astronaut can cut and retain a zip tie securely in a motion similar to clicking a pen,” said Associate Professor of Engineering Yiheng Wang, co-adviser with Associate Professor Jared Cammon. “The team’s preliminary tool design received constructive feedback for modification from NASA experts, but was still creative and practical enough for the team to move on to the final testing stage.”

The tools these college and university teams are designing for Micro-g NExT address an authentic, current space exploration challenge. Upon successful testing, these student-designed tools have the possibility of being used for future NASA exploration missions.

The Micro-g NExT program helps support an education policy of using NASA's unique missions and programs to engage and encourage students to pursue science, technology, engineering and math (STEM) careers.