TOMBALL, TX:   There’s nothing like an international challenge to bring out the best in people.  That’s especially true for Lone Star College-Tomball students participating as delegates in this year’s National Model United Nations Conference competition where their team was recognized with three awards including the coveted Distinguished Delegation Award that placed the team among the top 25% of competing colleges and universities from around the world.

While this was the twelfth year LSC-Tomball students have participated in the conference, it was the first time the college competed with a delegation consisting of members exclusively from its campus.

“This was the first time all but one of us had ever done something like this,” said Noelle Files, the leader and head delegate of a team that came together while learning to see the world through the eyes of its adopted nation.  The members bonded during the experience and now enjoy the rewards of relationships that will last far into the future.

“We had to get a grasp of our nation and learn what a UN delegate does.  Along the way our team built unique relationships, we learned to look out for each other, and that support and a selfless group effort, was a win.”

The students represented the three-island nation known as The Union of Comoros, one of the tiniest members of the United Nations.  Located off the eastern coast of Africa, Comoros is a poor country with one of the highest population densities in the world.  Its citizens struggle with high unemployment, a meager economy and illiteracy, difficulties made worse by an unwieldy political system that grants each island the autonomy to govern largely as it sees fit.

“We knew it would be a little difficult representing a rather small country that no one really knows of,” said second-year delegate Kimberly Wilson, “But that was the whole point. Going into it, they told us that it would be a challenge and that you'd have to take on a lot of responsibility and put in a lot of work.”

Kimberly is also the President of the Student Government Association and will give the Student Keynote Address at her upcoming graduation in May, “I really loved the teamwork, and it was cool, being able to get different people's perspectives and their ideas while we were getting prepared before and during the conference.”

The five day Model United Nation Conference (MUN) simulates the operations and activities of the 74-year-old institution.  Student-delegates act as diplomats representing their chosen country and are assigned to committees tasked with examining international issues.  One of the assignments requires each student-delegate to write a position paper on how their country would address these problems.

Aisling Lyons, a member of the LSC-Tomball delegation, was recognized with an Outstanding Position Paper Award for her work exploring the role of youth in achieving the Paris Agreement which deals with global climate change.  She says her research opened her eyes, not only to the impact of greenhouse gases, but also to the difficulties poor nations face, “In America, most of the kids are getting a proper education, whereas in Comoros the education rate is very, very low. So, before the country can begin to address climate change, they have to first develop their education system so that people can actually learn to read about these things and become more aware of the global scope of these issues.”

The third award was won by Paris Rithamel who was recognized as an Outstanding Delegate in Committee for her efforts on the UN Entity for Gender Equality and the Empowerment of Women (UN-Women).  This award was determined by a vote of her peers in committee.  She was recognized for the strength of her policy contributions and her ability to diplomatically represent the interests of Comoros.

“It was an intense week of learning how to collaborate, lead, write and deliver speeches on international issues,” said Dr Margaret Jelinek Lewis, Faculty Fellow for the Center for International Education, professor of psychology and the team’s faculty co-advisor. “It was also a week of long days and focused work, a week of cheering each other on.”

Speaking like a seasoned diplomat fresh from an overseas assignment, Noelle agreed the conference was a real eye-opening experience, “Tasked with representing a nation like Comoros you begin to see all the limitations a third world nation faces.  For instance, the people of Comoros may have the desire to participate in exploring new ways available for affordable, clean energy for their country but they lack the resources to begin initiatives.”

“It is a striking accomplishment for a group of students with no experience in international affairs to do as well as they did,” said Prof. David Birch, co-advisor for the delegation and professor of government. “They represent LSC-Tomball’s commitment to provide pathways to leadership of women in international education.”

Aisling says she was able to meet new people from around the world and is still in touch with students from as far away as Africa and the Middle East, “Going to community college, I don't have the kind of global exposure that you might get at a bigger university. So it was my first time getting to speak with so many people from around the world. To me, that's just really enriching, because I think that you can learn so much from people from other places.”

Jelinek Lewis is delighted with team’s efforts and proud of its accomplishments, “The efforts of our delegates who represented The Union of Comoros paid off and they are so excited about the experience that they have already agreed to start practicing for next year.”

Lone Star College-Tomball is located at 30555 Tomball Parkway, at the intersection of SH 249 and Zion Road. For more information about the college, call 281.351.3300 or visit LoneStar.edu/Tomball. 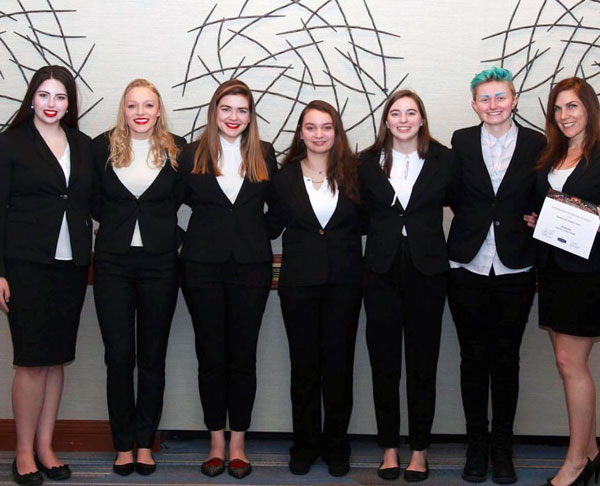