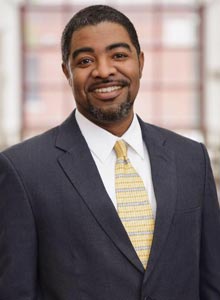 During his academic tenure, he has been active in state, regional, and national organizations. He has served as a member of the Texas Higher Education Coordinating Board Developmental Advisory Committee, has served on multiple Southern Association of Colleges and Schools (SACSCOC) accreditation teams, and participated in the national student success project Gateway to College. He is currently a member of the Aldine-Greenspoint and Near Northwest Management District Boards of Directors.

Dr. Wright is the recipient of various awards and honors. Among these are the Mountain View College Administrator of the Year Honor, Dallas County Community College District (DCCCD) Focus of Excellence Award, and the Who’s Who Among American College Teachers and Educators distinction. Dr. Wright was also Angelo State University’s first recipient of the Outstanding Graduate Student award for the Department of Communications, Drama, and Journalism.

Dr. Wright is married to his wife, Tierra, and has two daughters, Amaya and Victoria.