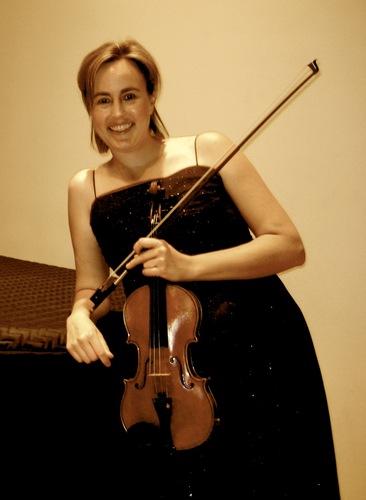 Professional:
Lisa Burrell resides in Houston, Texas, where she teaches privately, is on the faculty of Lone Star College, serves as a regular public school string clinician and is active in chamber music performance. She is on the summer violin faculty of the Performing Arts Institute of Wyoming Seminary in Kingston, Pennsylvania, and she served as a full time violin/viola professor at Sam Houston State University from 2004-2009.  Lisa's current passion in education is a project for supporting and promoting the incorporation of chamber music study in public school string programs.  She acts as a clinician on a weekly basis in various Houston area public schools. Lisa is a graduate of the University of Virginia (B.A.), and Northern Illinois University (M.M.), and she received her doctorate in violin performance from the University of Houston in 2002.  Her former teachers include Raymond Montoni, Mark Rush, Mathias Tacke, Shmuel Ashkenasi and Lawrence Wheeler.

Lisa has performed as a part of the Burrell-Blondel Duo since 1996, and appears regularly with pianist Yung-Chiu Wang.  She has been a member of the Key West Symphony since its inception in 1998.  She was the violist of the Kolonneh String Qurartet, and has performed as a member of the Rilke Piano Quartet, the Blue Rider Players and participated in the River Road Project.  She has also served as a Performing Associate at the Bowdoin Summer Music Festival and a fellow at the Hampden-Sydney Chamber Music Festival, and collaborates regularly with colleagues throughout the US to promote chamber music performance.  Since 2004 she has been involved in organizing and performing benefit concerts with fellow chamber music enthusiasts to raise money for the AFAL teacher education fund of Lascahobas, Haiti, and the Ixtatan Foundation of San Mateo Ixtatan, Guatemala. Recent performance and teaching opportunities have also allowed Lisa to travel the globe.  In 2008 she traveled to Leon/Guanajuato, Mexico, to perform in the Leon Cultural Center, and to work with students of the Esperanza School.  In 2009 she was part of a promotional tour for the Alfredo San Malo Music Festival in Panama, playing and teaching in Panama City, El Valle de Anton and Nata.  In May 2009, she travelled to Cuenca, Ecuador, to teach masterclasses and lessons, and perform in the city's beautiful modern art museum. In December 2009 she traveled to Amman, Jordan, to present classes and perform a recital with Iraqi pianist Mohammad Uthman Sidiq at the Amman Conservatory of Music.

As an educator in Houston, Lisa has given over 100 clinics and masterclasses to middle school and high school students.  She has served regularly as a judge for All-Region, All-State and UIL Solo Competitions.  She has been invited to present at teacher in-services, the Texas Orchestra Directors’ Association Convention, Texas Music Educators’ Association Conference (2009, 2010), and will present two educational sessions at the American String Teachers Association Conference in Santa Clara, CA in February 2010.  Lisa’s specific interests are in promoting pedagogy that stresses alignment and injury prevention, teaching informed musical expression, and cultivating a fulfilling and lasting relationship with music among her students.  In addition to her university and summer teaching, Lisa teaches privately in the Houston area; her students have been members of Texas All-State and All-Region Orchestras, the Houston Youth Symphony, the Greater Houston Youth Orchestra, Virtuosi of Houston, and have gone on to top colleges and universities.

In addition to her love of playing and teaching the violin and viola, Lisa enjoys swimming, jogging, yoga, solving logic puzzles and cooking for friends.