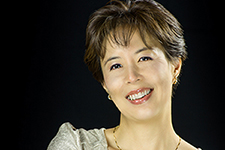 Professional:
Pianist Naomi Shibatani has appeared in performances in numerous cities within the U.S. such as Los Angeles, San Francisco, and Houston, and has performed extensively throughout France and Japan. She collaborates frequently with her cellist husband, and together, they have performed many major works for the cello and piano as well as numerous other chamber works for piano and strings. Her collaboration with her husband is also showcased in the soundtrack for the PBS film “Texas Before the Alamo,” where her husband served as co-producer of music. She is also a highly dedicated pedagogue, and has taught at numerous institutions including Oberlin Conservatory, Indiana University Bloomington, Rice University, and has served as faculty at Sam Houston State University, and Alvin Community College. She has always maintained a strong private piano studio wherever she resided, including Bloomington (IN) Paris (France) and Houston (TX), and her students have won top prizes and honors in local competitions. She has also served as a judge for numerous piano competitions in the region including C.C.M.T.A. and Houston Music Teachers’ Association. Dr.Shibatani has earned her B.A. in Psychology, and B.M. in Piano Performance from Oberlin College, where she studied with Joseph Schwartz and Jack Radunsky. At Oberlin, Dr.Shibatani performed with the Oberlin Chamber Orchestra as a winner of the Senior Concerto Competition. She also performed in many masterclasses including those by Yefim Bronfman and Jacques Rouvier. At Indiana University Bloomington, she studied under the tutelage of Menahem Pressler from the Beaux Arts Trio and Edmund Battersby, and earned her M.M. with a cognate field in Music Education. At Bloomington, she worked with many renowned musicians such as Josef Gingold, Franco Gulli, and Yuval Yaron. She completed her D.M.A. in Piano Performance at Rice University where she studied with Brian Connelly and Jon Kimura Parker, and also worked frequently with Paul Katz from the Clevleland Quartet. As a highly versatile pianist, she has also studied Fortepiano with David Breitman and Harpsichord with Elizabeth Wright. Dr.Shibatani currently serves as a faculty at Lonestar College Montgomery, and resides in The Woodlands (TX) with her husband and three children.