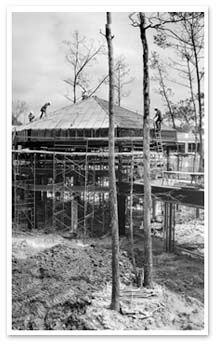 Once the CISD election proved successful, the wheels for the creation of what was then called Montgomery College spun quickly. The NHMCCD Board of Trustees hired the college's founding president, Dr. Bill Law, to lead the birth of the college.

In fall 1992, the first classes were offered in the evening at McCullough and Conroe high schools, and more than 1,000 students enrolled. A logo and colors for the college were adopted.

In January 1993, the Conroe Center opened at the Pinehollow Shopping Center in north Conroe, serving as a commitment by the college to serve all of its service area in a meaningful way.

In early 1993, construction began on the campus at 3200 College Park Drive.

Creating new programs, hiring the best faculty and staff, and establishing vital connections throughout the community were also extremely important leading up to the scheduled opening of the college - August 14, 1995.

On that day, with then Texas Governor George W. Bush presiding at the dedication, Dr. Law announced that Montgomery College had finally arrived.

"The sun is always shining at Montgomery College," he said. "It shines because we have the tremendous opportunity to help people improve their lives."

Law also announced that the college would become the best community college in the United States. The coming years would prove him right in many ways.